Report from the G7 meeting for urban ministers​

Held in the historic city of Potsdam — a site made famous for international conferences to co-develop solutions of global significance — the meeting was organized to foster: “a joint understanding of good urban development policy and to decide on joint initiatives for unlocking the full potential of cities to promote social, cultural, technological, climate-neutral, economic, and democratic innovation for the common good.”

That ambition closely reflects the ambition and work of Canada’s Urban Institute, which is why I attended.

CUI has over 30 years of facilitating peer-to-peer learning and professional exchanges with city builders working around the world, through projects supported by Canada’s previous department: the Canadian International Development Agency. Especially active in the years following the fall of the Berlin Wall and the subsequent reconstruction of Eastern Europe, CUI is once again keen to create and contribute to platforms that catalyze effective problem solving and the best quality of life for all.

The challenges we face in Canada were mirrored by the delegates from the other G7 nations — notably the pressures placed by climate events, housing shortages across the continuum, increasing migration, and the longer-term implications from two years of COVID. Much more visceral here were the immediate impacts of the war in Ukraine, the urgency for temporary housing, and the impact on energy prices.

Each G7 delegate was invited to send its ‘minister responsible for urban development.’ For Canada, this is not a straightforward assignment, as we do not have a department of urban development, but instead have spread various tasks of urban stewardship across almost a dozen ministries.

Further, Canada’s urban priorities are by their nature place-specific, spanning across economic, social, and environmental sectors; as such, they need interdisciplinary and cross-sectoral action. So it’s a tough task to identify who in the federal government would best represent Canada’s approach to ‘good urban development.’

Designated to attend the G7 meeting were Ministers Ahmed Hussen (Housing and Diversity and Inclusion) and Dominic LeBlanc (Intergovernmental Affairs, Infrastructure and Communities). Their participation, though, was impacted by the death of Queen Elizabeth II, which placed all members of the House of Commons through a formal mourning period. An original delegation of 11 government representatives was quickly reduced to two: Kelly Gillis and Janet Goulding, the Deputy and Assistant Deputy Ministers with Infrastructure and Communities Canada, respectively.

In addition to ministerial representatives (or in Canada’s case, senior public servants), three global organizations were formally present at the meeting: the OECD, UN-Habitat, and a new alliance called the G7U7 — an alliance of municipal associations convened in Europe by ICLEI.

As is typical with international events — where sessions are highly formalized and attendance exclusive to official delegations — many productive discussions took place in the corridors and spontaneous gatherings. Further, the German government convened its 15th Federal Congress for National Urban Development Policy in Berlin immediately following the Potsdam gathering. Many of the G7 speakers also presented during the Berlin event, which featured more open and diverse attendance. 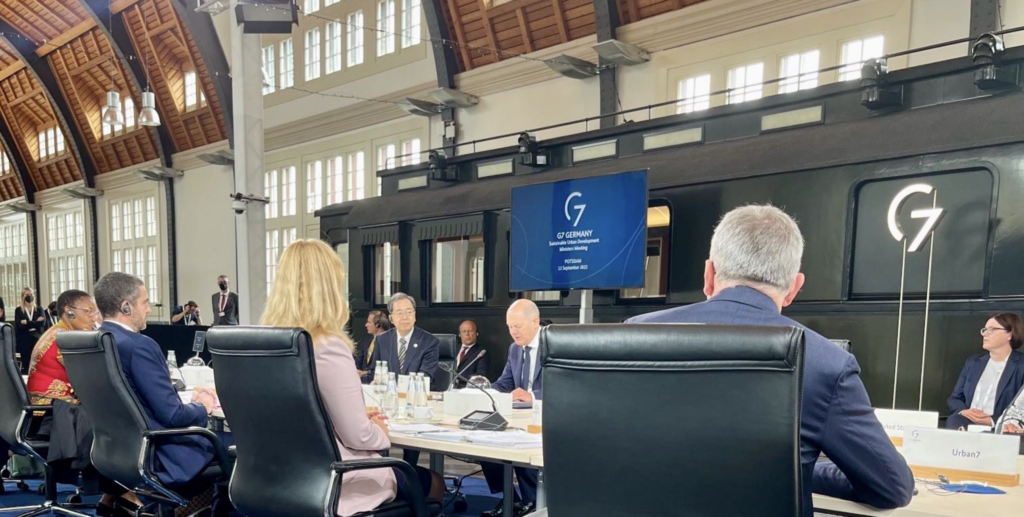 Bruce Katz, CUI Fellow and Director of the Nowak Metro Finance Lab, was invited to address both meetings, which he did with characteristic American frankness. The challenge he posed: that national governments must look for ways to harness the extraordinary capacity of urban networks — alliances of businesses, anchor institutions, civil society, community leaders, and municipal government — to solve problems and build the economic futures and social fabric of their societies.

Katz’s challenge aligned closely with the CUI value proposition: that ‘connective tissue’ between city-builders is essential to effecting the changes we need to cope with the effects of COVID, climate, increasing mental health challenges, and the future livability and resilience of our cities.

Katz also outlined the ‘wall of money’ that the US national government is pouring into infrastructure and innovation in cities.

We will circle back with Katz and other CUI Fellows this fall for a CityTalk on their impressions of the challenge. In the meantime, his recently posted newsletter summarizing his impressions can be found here, and the text of his G7 keynote address here. CUI will subsequently post his address to the Urban Development Forum, which includes his offering of the Dolly Parton Principle, paraphrased here: do what you know, with purpose.

None of the G7 governments have structures that make it easy to craft national policies that work for local communities. A shared discourse emerged here about how to square constitutional and historic traditions with the settlement patterns that see larger and larger urban populations — where the challenges are most acutely experienced, but also the solutions are most effectively incubated.

Hence, there was significant interest in the role of place-based, multi-sectoral networks where each contributes according to its capacity and expertise (e.g., financial intermediaries provide capital, governments create enabling conditions, civil society and institutions support innovators).

Another theme to emerge was the need for effective intermediaries — at the international, national, and regional scales — who help broker effective collaborations and build new forms of ‘collaborative infrastructure’ that bridge practice to policy.

Underpinning the Potsdam and Berlin discussions has been a sense of urgency — especially about impacts of the climate crisis. This topic was top of mind in Germany, which experienced a very hot summer in 2022, with fires and floods. And in the week before the G7, Berlin hosted the International Metropolis Conference, with a theme of “changing migration, migration in change.” Canada was represented at Metropolis by Senator Ratna Omidvar, with whom I met as she left, and I arrived. Senator Omidvar reiterated the extraordinary challenges expected for Canadian cities as the number of climate refugees dramatically climbs over the next two decades.

City-builders across Canada — from all sectors — need to continue to demonstrate the ‘radical collaboration’ called for here at the G7, to punch above our weight (our population is so relatively small), and to contribute solutions to the global urban community.

As we head toward COVID 1000 in December and reflecting on what our COVID Dividend will be, Canada is at a critical juncture: to recover our cities, neighborhoods, and our economic and social systems that have become visibly so frayed.

Grounding urban policy in what actually works — what evidence supports, what practitioners have seen and know — is the challenge we collectively face, as we find ‘workarounds’ to decision-making structures developed two centuries ago.

I leave you with a key sentence from the meeting Communiqué (which Canadian civil servants made fine contributions to):

“Political action in urban development is oriented towards the common good and aims to balance public and private interests in democratic decision-making processes at all levels, including the municipal level. Collaborative and democratic working processes are characterized by the principles of subsidiarity, interdepartmental and multi-level cooperation of the public administration, the involvement of relevant actors at all levels, local planning autonomy, co-creative participation of all concerned stakeholders — including bottom-up participation — and the rule of law.”

This is our abiding work together: to support policymakers charged with providing direction and steering investment with the best practitioner intelligence to address challenges and build opportunities for all.