COVID-19 has exposed how vulnerable Canadian cities really are

This op-ed originally appeared in the Nature of Cities.

A few months before COVID, I accepted a position to lead a national charity focused on the quality of life in Canadian cities. Canada’s Urban Institute was founded 30 years ago, before cities were as widely acknowledged as the dominant unit of human settlement of the 21st century. But in 2020 they are. Canada is one of the most urbanized countries in the world with close to 90 per cent of the population living in communities of 5000 people or more. Two-thirds of this nation’s GDP comes out of six urban centres. But the dominant narrative in Canada does not reflect this reality. We still perpetuate a settler story: rural communities, smaller towns, two or three “global” but more likely niche cities, and an agrarian and resource extraction-based economy.

“I think the most profound challenge for any of us working in urbanism through and after COVID, is now that we have seen how our cities truly function at their most vulnerable, what possible excuse do we now have to not emerge solely committed to fixing it?”

The dilemma that aged story presents Canada is an absence of coordinated urban policies and inconsistent public investment commitments to address real challenges.

To create a more realistic and compelling narrative to lead to systemic change, my focus taking this gig was to focus on creating new forms of connective tissue: to foster an ecosystem of urbanism — horizontal, peer-to-peer learning in a vast country whose governance has historically run vertical: from municipalities to provinces to the federal government. What if we were able to catalyze connections between city builders — in every sector, people engaged in making their urban places more livable and resilient?

We were headed on to doing that, planning urban “residencies” in a dozen cities where we would set up a week of deep listening and connecting. The first were to be in April in two cities hardest hit by the global collapse of the oil industry: Edmonton and Calgary.

Then COVID-19 hit and travel plans were dashed. 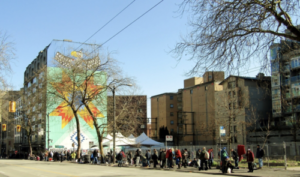 COVID-19 seems to have acted like a particle accelerator — a term I borrow from NYU sociologist Eric Klinenberg, who first used the analogy to describe the how the 1995 heatwave in Chicago exposed all the neighbourhood dysfunction that existed before that July, leaving poorly designed and under resourced neighborhoods much more vulnerable than others. We see the same in our urban neighbourhoods in Canada here in 2020. Where density was imposed without adequate public amenities, creating isolated, often over-crowded buildings, the impacts of COVID — and stay at home orders — have been devastating. Similarly, our city shelter systems, safe consumption sites, food banks — none of these have proven adequate to provide these essential services in safe, socially-distanced ways. Victoria has moved their support operations to town parks; Toronto shelters to sports arenas; public library parking lots are now food-bank depots (with librarians now stocking pantry shelves).

Our efforts during COVID have been to create three live platforms to grow our connective tissue and create a dynamic narrative: www.citywatchcanada.ca, www.citysharecanada.ca, and www.citytalkcanada.ca. These are being populated daily by hundreds of partners and volunteers. That’s the connective tissue value proposition: it tells the good (how responsive local governments and resourceful communities have been), the bad (areas where resources are badly lacking and planning and design has utterly failed) and the ugly (the starkness of underlying inadequacies in so many areas). I think the most profound challenge for any of us working in urbanism through and after COVID, is now that we have seen how our cities truly function at their most vulnerable, what possible excuse do we now have to not emerge solely committed to fixing them?

Mary W. Rowe is the CEO of the Canadian Urban Institute.