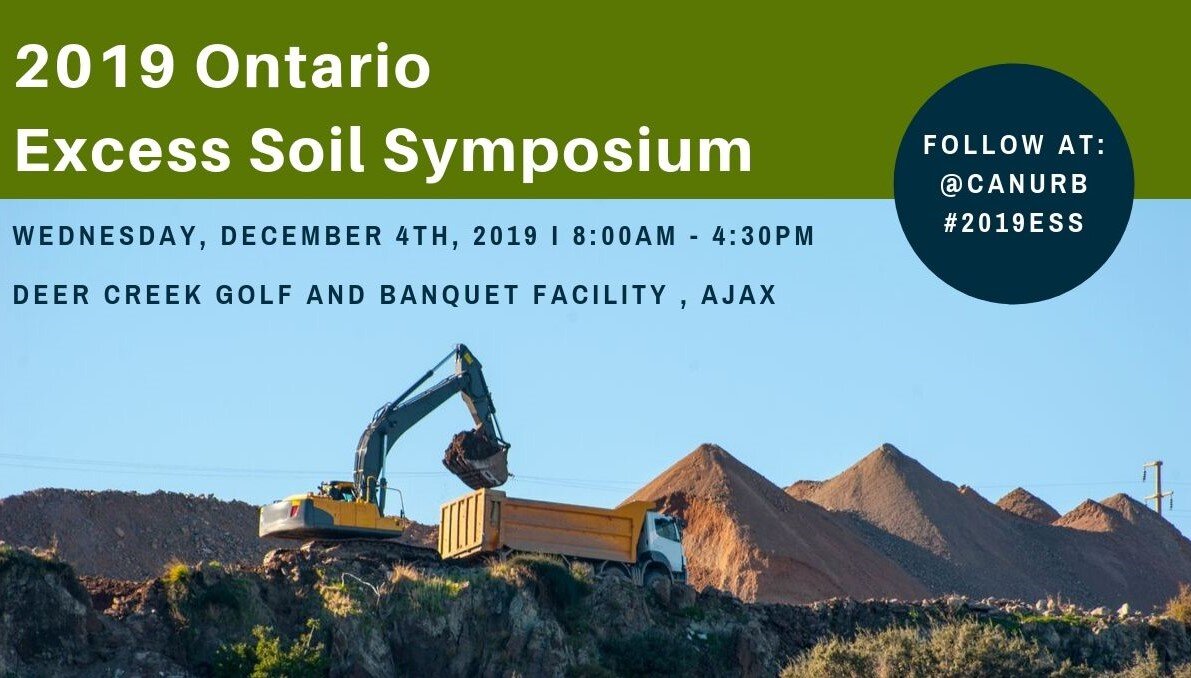 Construction and development in Ontario generate millions of cubic metres of excess soil that must be transported across the province each year. The movement and relocation of soil must be properly managed to mitigate negative impacts on communities and the natural environment.

On December 4th, the Canadian Urban Institute was joined by experts from industry, government, NGOs and academia to discuss how we are working together to develop solutions for better excess soil management. Minister Jeff Yurek announced the new provincial regulation on excess soil management will be phased in starting July 1, 2020.

Please see a message from our Lead Sponsor and Opening Keynote: Jeff Goldman of SoilFLO.

A proud lifelong resident of St. Thomas, Jeff grew up with the family business, Yurek Pharmacy Ltd., which was started by his father Ed in 1963. In addition to growing the pharmacy’s operations, Jeff was actively involved in numerous local charitable and not-for-profit organizations. His desire for a better Ontario motivated him to seek the nomination for the Progressive Conservative Party, and he became the riding’s MPP in October 2011.He has served in various roles in government including PC Health Critic, Natural Resources and Forestry Critic, and Transportation and Auto Insurance Reform Critic, Minister of Natural Resources and Forestry, Minister of Transportation, and is currently the Minister of the Environment, Conservation, and Parks.

Kathryn Beaton currently manages environmental compliance, including soil management practices, on design build transit infrastructure projects. These construction projects are obligated to comply with the MECP Management of Excess Soil – A Guide for Best Management Practices. Working alongside construction teams, Kathryn has a strong understanding of how operations are impacted by permitting and regulatory requirements.Kathryn’s discussion will review challenges associated with excavated materials management and lessons learned to focus on when pursuing future projects.

Janet is recognized as a leading practitioner in environmental law. She works with many industrial sectors, including manufacturing, mining, transportation, chemical, pulp and paper. She advises on climate change issues and Ontario’s cap-and-trade regime and issues related to the Canada – European Union Comprehensive Economic and Trade Agreement (CETA). She also provides advice in relation to aboriginal consultation and how to work collaboratively with aboriginal groups.She recently received a career achievement award from the Canadian Brownfield Network as a person who has had a profound impact on the Brownfield industry in Canada.

Al spent 35 years working for Imperial Oil Limited in the engineering, distribution, marketing and environmental operations areas. In the past 12 years, he has provided consultation for the private and government sectors associated with risk-based approaches to encouraging site remediation and Brownfield redevelopment. Most recently, his focus area has been the responsible management and beneficial reuse of excess construction soils in Ontario.Working with the Residential and Civil Construction Alliance of Ontario (RCCAO), Al has provided input to the development of excess soil best management practices which in turn led to the creation, in 2013, of the excess construction soil-matching web site SOiiL.

Lori Fox is a certified engineering technologist employed with the County of Brant Development Engineering Division as their Supervisor of Field services. Lori draws on 30+ years of experience in the civil engineering field including design and review of private and municipal projects. For the past 10 years, Lori has overseen the implementation of Site Alteration By-laws for the Township of Scugog and the County of Brant.

Jeff Goldman is an award-winning homebuilder, land developer and entrepreneur who is recognized for blending successful business practices with environmental stewardship. He is a Past President of The Durham Region Home Builders’ Association and is the delegated representative for The Ontario Home Builders’ Association to The MECP’s Excess Soils Working Group. Jeff is a Principal of SoilFLO Inc., a company achieving improved excess soil management outcomes for many large and diverse construction projects throughout the Province. He is a dynamic and engaging speaker who both informs and challenges audiences to achieve heightened performance

Dr. Kelly-Hooper has over 25 years of experience in the private and government sectors, operating her environmental consulting business, Kelly-Hooper, from 1998-2014. Over the past 18 years, Francine has developed new approaches to soil and sediment beneficial use through her PhD research and environmental consulting projects.Her research has recently led to the first federally and provincially approved SWM pond sediment beneficial use projects in Canada.

Karim Hosny is currently a member of the Environmental Management Team with Crosslinx Transit Solution – Constructors working on the Eglinton Crosstown LRT (ECLRT) Project in Toronto. Karim leads a team of environmental professionals responsible for soil management practices across the ECLRT Project. Upon completion, there will be over 2 million m3 of excess soil excavated and removed off site from the various stations and stops, all of which are required to adhere to the MECP Management of Excess Soil – A Guide for Best Management Practices.Karim’s discussion topics will include the strategies involved in completing these soil management practices; from pre-characterization of the soil, to finding various disposal locations and tracking the soil, along with challenges faced along the way.

Meggen has over 25 years of experience in environmental consulting, environmental management, risk assessment, and remediation projects. She has implemented soil management best management practices based on the MECP’s BMP and concepts in the draft Excess Soil Regulation on a variety of brownfield and non-brownfield projects and has developed soil reuse specifications that have been used on infrastructure and remediation projects.She also has experience in groundwater characterization; treatability studies; physical, chemical, and biological in-situ treatment system design; wastewater and vapour treatment facility design; system start-up and commissioning; operations and maintenance (O&M); and permitting.

Patrick McManus is the Director of Government Relations and Communications for the Ontario Sewer and Watermain Construction Association (OSWCA). His role is focussed on advocacy and relationship building with provincial and municipal decision-makers on key policy issues affecting the sewer and watermain construction industry. Prior to working with the OSWCA, Patrick was employed in a similar role with the Ontario Road Builders Association. He also has experience working in the field as a general laborer for a major Canadian road building contractor. Prior to his employment in the construction industry, Patrick was employed by the Government of Canada at the Department of Foreign Affairs, Trade and Development working on international strategy around Canada’s development aid program.

Monisha provides strategic direction on environmental assessment, remediation and risk management activities for Kilmer Brownfield’s portfolio of real estate developments and potential acquisitions. With more than a decade of experience in the brownfield management and development industry, Monisha’s experience has spanned across many industries including real estate development, oil and gas, manufacturing, and environmental consulting.Monisha holds a master’s degree in Applied Sciences in Chemical and Environmental Engineering from the University of Toronto and is a Board Member and Committee Chair for the Canadian Brownfield Network.

At Stantec, Gus is a thought leader in digital technologies for engineering and environmental work in addition to knowledge management. Volunteering and travelling with his family provide inspiration for Gus to create powerful solutions for his clients. By helping clients manage their knowledge and information, they are fully engaged in execution, delivery, and overall project success.

Mr. Walsom is a Professional Engineer registered in Ontario, Nova Scotia, and Alberta, and a registered Consulting Engineer in Ontario with over 25 years of experience. In addition, he is a Qualified Person as defined by O. Reg. 153/04. Since 2011, he has been on the Board of Directors for the Ontario Environment Industry Association and is the co-Chair for the Excess Soils Working Group. In his role with ONEIA, he recently participated in the Ontario Environment Ministry’s Excess Soils Engagement Group.Mr. Walsom also serves on the Board of Directors for the Canadian Brownfields Network. He was proudly named the CUI 2015 “Brownfielder of the Year.”

Dr. Paul Welsh is the Brownfield Program Coordinator with the Ontario Ministry of Environment, Conservation, and Parks (Ecological Standards Section, Standards Development Branch) and was involved with developing the proposed excess soil standards and regulation. Previously, he worked as a research scientist with the ministry and has extensive experience with ecological and human health risk assessments at contaminated sites. He also has environmental consulting experience working in the United States on several Natural Resource Damage Assessments. He has an MSc in Zoology from the University of Guelph and a PhD in Biology (Aquatic Toxicology) from the University of Waterloo.

Nicholas is joint manager of CL:AIRE, a UK based NGO which champions the sustainable management of land. At CL:AIRE he manages the development of the Definition of Waste: Development Industry Code of Practice (DoW CoP) – a successful, co-regulation approach to excavated soils reuse. Alongside this, he has developed CL:AIRE’s online ‘Register of Materials’ which successfully matches projects with surplus soils to those with a deficit. Nicholas also leads the auditing and review process on behalf of CL:AIRE and UK Regulators and led the first research into the benefits of soil reuse through sustainability assessments of real projects. The outcomes of this work creates a very strong argument for the adoption of such approaches and highlight the clear value of soils and the need to protect them as a valuable natural resource through the creation of a circular economy. Jim is the former Assistant Deputy Minister of the Climate Change and Environmental Policy Division at the Ontario Ministry of the Environment and Climate Change. He led teams that were responsible for the development and implementation of a range of climate change related policies and programs including Ontario’s cap and trade program with California and Quebec and GreenOn to finance the deployment of low carbon technologies. His other policy and program responsibilities included Great Lakes water quality including the Canada-Ontario Lake Erie Action Plan towards U.S.-Canada binational commitment to reduce nutrient loadings, renewable fuels for transportation and buildings, indigenous relations and inter-governmental affairs.He also led Ontario’s participation with the Canadian delegation at UN COP 13 Climate Change Conference in Bali and worked on developing carbon offsets to help finance reforestation in the Sierra Gorda Biosphere Reserve in Mexico.