The democratic deficit in Canadian cities during COVID-19 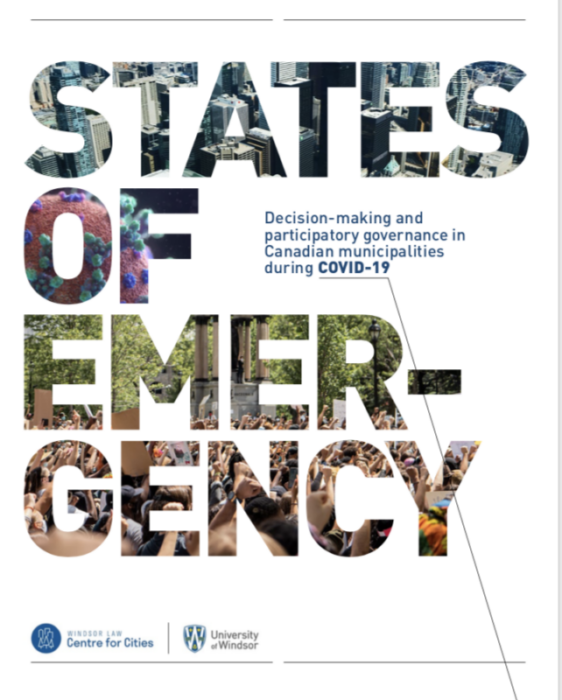 Municipalities across Canada have been faced with some of the most challenging governance issues in the COVID-19 pandemic. Many of the decisions most directly affecting the daily lives of Canadians have been made by municipalities. These include access to parks and playgrounds, changes to transit service, availability of municipal services including libraries, community centres and recreation facilities, enforcement of physical distancing requirements in public spaces, closure of shopping malls, land use and transportation policy changes to allow for increased bicycle and pedestrian pathways, and — later in the pandemic response — whether to pass mask bylaws and what, if any, supports were necessary to allow small businesses to stay afloat.

What is more, prior to the pandemic cities were already at the epicentre of dealing with some of the major crises of our time: climate change (and unsustainable patterns of growth), widening socio-economic inequality and the dearth of affordable housing, to name a few. Race-based violence and police brutality that has been present in North America for centuries was brought to the fore on 25 May 2020 by way of the murder of George Floyd, a Black man, at the hands of a white police officer in Minneapolis, Minnesota. This horrific event highlighted the systemic racism and race-based violence experienced by Black, Indigenous, and other People of Colour (BIPOC) in cities across North America, sending millions into the streets in protest and amplifying calls for deep institutional change. Many of these actions have included demands for more, and more diverse, voices to be heard by municipal decision makers, and for more meaningful consultation with those most deeply affected by the decisions being made.

Yet during the pandemic, state of emergency declarations helped to create a situation in which major decisions were being made in Canadian municipalities by mayors and/or city administrators, with limited input from elected councils, standing committees and commissions, or members of the public.

The ability of residents to impact the decisions that affected them —participatory governance — was limited while important decisions on issues from transit service, to physical distancing fines, to the closure of local businesses were being made. While such limitations on participatory governance affect all residents, they especially impact the vulnerable communities whose interests already tend to be under-represented in municipal decision-making. These communities — and in particular Black, Indigenous, and People of Colour (BIPOC) — have also been some of the most deeply affected by COVID-19.

Further, while the pandemic has demanded quick decision-making on measures largely intended to be temporary, many of these decisions will have opportunity costs and potential longer-term impacts for cash-strapped municipalities pulled in multiple directions. The result is that some of the most important decisions to be made by municipalities in recent history have been made with little to no input from the people likely to be the most impacted.

Against a backdrop of the provincial legislative frameworks enabling municipal states of emergency across the country, the Windsor Law Centre for Cities has released its first report, on states of emergency and participatory governance in Canadian municipalities during COVID-19. This study presents a scan of municipal decision-making practice during the early weeks of the 2020 pandemic. While responses were as varied as the underlying governance cultures of Canadian municipalities, some patterns emerged: the exercise of unilateral mayoral powers, the cancellation of council and committee meetings, and deep limitations on public participation in all levels of municipal decision-making.

The study also highlights encouraging signs, including some municipalities that managed to continue robust public consultation and participatory decision-making even at the beginning of the pandemic, and some new practices which will continue to improve municipal governance when the pandemic recedes. It concludes with recommendations for reform of provincial state of emergency legislation as well as changes to municipal governance practice, to ensure that Canada’s local governments are better prepared for the next emergency — whether another wave of COVID-19 or something new.

Provinces, through legislative reform, should